Tradiny works not only with traditional indicators, however the largest added value of the application are our tailor-made unique indicators. 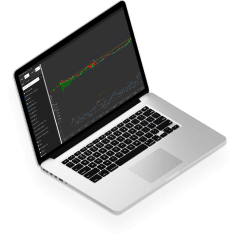 How to start with trading

The algorithm is based on the raw market movement algorithm. As a result, the trend begins after the asset breaks the high/low and reaches a specified threshold depending on volatility, which makes it a leading indicator. Traders are advised to wait for the pull back after the trend forms (i.e., high/low is broken).

It helps to catch the beginning of a trend in early stages based on the raw marker movement algorithm.